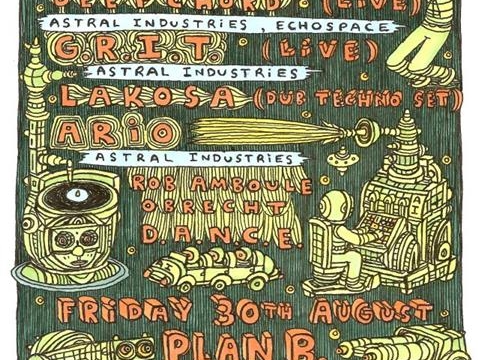 Ok so here we have some EXTREMELY SPECIAL.

Just check out the line up:

Astral Industries are proud to present an artist who needs little introduction – Rod Modell a.k.a. Deepchord. With an album set to drop on Soma in September and with ASTRAL001 following soon after, Rod remains as prolific as ever and we can think of no better way to start off the weekend than with an exclusive live set from one of the motor city’s finest.

Last year saw Gary Brackley confirm his position as one of the UK’s biggest dub techno talents. Highlights included the massive ‘TTX-E2’ and having ‘Expanse’ remixed by the likes of cv313 and Quantec. Bringing a rare live set to Plan B’s basement, G.R.I.T. is an artist with a truly promising future in the scene.

Ever since releasing his critically acclaimed debut on Kerri Chandler’s Madtech imprint, it has been nothing but exponential growth for newly settled Londoner Lakosa. Best known for deep house and garage-influenced rollers, he’s accepted our challenge to draw from the deeper end of his eclectic record box on the night.

This is a must for any dub techno fan!  I hope to see as many readers of this blog down there as possible.  It’s going to be an incredible night.